In Late February, 2015, we had a neft pipe run from our neft tank (outside the front of the house, to the center of the house. It was then to go at a right angle across the room and down into the basement.

Prior to that, the workers broke the pipe twice - at one point the fire department had to be called because our back yard was flooded with neft.

Around May of 2015, it was noticed that the grout between the tiles against the wall where the pipe went at a 90-degree angle was darkening and smelling of neft. the Kablan, opened the floor, and supposedly fixed the problem.

In March of 2016, prior to the end of the period where the final payment for the work was due, we noticed that a 4-x-5 tile area (for a total of 20 tiles) had all of the grout darken. It smelled.

We called back the Kablan, he lifted up a tile, brought a gas man to fix the leak, cleaned up a small amount of sand, and left. It was promised that they wold return and correct the problem further.

I assumed that it meant opening up the floor, removing all of the neft-saturated sand, cleaning it up, and replacing the tiles, and that they would do this at their own cost since this was neft-error-#4 on their part.

And here is what we were left with, and the stench of neft filled the main floor of the house: 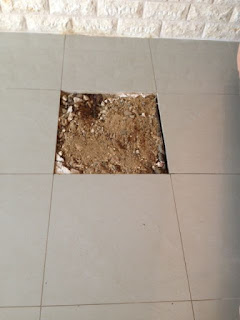 I was told by G. that there was no plan to fo anything further, and to let it "air out for a few days".

In this photo, the red circle near the wall is where the first repair took place. The white circle in the sand-hole is where the Arab Kablan and his "expert" corrected the second leak. The lettered tiles are indicated for immediate removal: 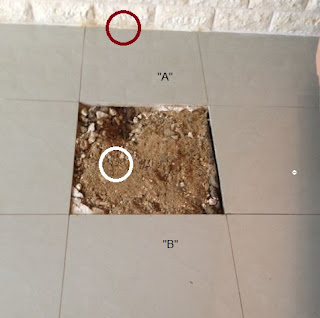 I called a second construction person to give me his input. The moment he walked in the door, he was hit with the smell of gas. He looked at the hole, and told me that it was dangerous. Also, the sand, because it is absorbent, will not let the neft evaporate, and living with all of that neft under the floor is dangerous.

I called a gas expert of my own to check the pressure of the pipe and to ensure that there are no other breaks and that the repairs are good. If everything is fine, I will have peace of mind. If not, then I will send the bill for his work to G.

To do that, he will need to remove the tiles above, marked "A" and "B" to have a clear view from the bend and past the most recent repair. 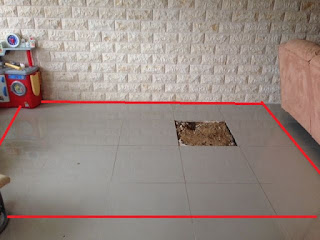 I am hoping that "G" will do the right thing.